What will innovative production of large structures look like in the future? The Fraunhofer Institute for Large Structures in Production Engineering IGP in Rostock is conducting research into this. The institute develops innovative concepts for product and process innovations. The research focus is on future-oriented industries such as shipbuilding and steel construction, energy and environmental technology, rail and commercial vehicle manufacturing as well as mechanical and plant engineering. The formerly independent research group was made into a Fraunhofer Institute at the beginning of 2020 and is now the first institute of the Fraunhofer Society to be headquartered in Mecklenburg-Western Pomerania. The decision behind this move was taken on 22 October 22 2019 at a meeting of the Executive Board of the Fraunhofer Society. Increasingly large and more complex structures have to withstand extreme mechanical and climatic stresses.

To address these challenges, a project group was founded in Rostock in 1992 by the Fraunhofer Institute for Manufacturing Engineering and Automation IPA. In 2017, this group became the independent Fraunhofer Institute for Large Structures in Production Engineering IGP, which has officially been an institute of the Fraunhofer Society since 2020. The scientists primarily specialise in finding alternatives that reduce the burden on the environment and workers. The aim of their research is to develop holistic solutions that enable more cost-effective and high-quality production.

“Resource-saving solutions for specialist production challenges are a crucial component in central industrial sectors in Germany and Europe”, explains Prof. Reimund Neugebauer, President of the Fraunhofer Society, on the founding of the institute, adding: "With the opening of the Fraunhofer IGP, Germany is taking a leading position in the development of efficient large-scale structures in production – a decisive contribution to making industrial value chains sustainable and future-proof versus international competition”.

The number of employees at the Institute continues to rise steadily. The research facility is currently being expanded in a fourth construction phase to include a production hall with lab and office space. “We have been a reliable and strong research partner of industry in Mecklenburg-Western Pomerania and beyond for many years. In the past two years we have been able to further expand our cooperation. We will continue to actively apply our expertise in the field of large structures in the future”, says Institute Director, Prof. Wilko Flügge.

In the new Fraunhofer IGP building, scheduled for completion in 2021, the future topic “Shipyard 4.0” will be in focus. Among other aspects, the Institute has specialised in research on production technology and processes, as well as on materials subsea. As a member of the Smart Ocean Technology research group, Fraunhofer IGP will also be represented in the Digital Ocean Lab.

Among other projects, the IGP is currently involved in the core development of the German Ministry of Education and Research "OWSplus - Floating Offshore Wind Solutions" project. Here, the alliance partners are developing solutions for the next evolutionary stage of regenerative power generation.

From the project group to the institute

You can find us here:
Fraunhofer Institute for Large Structures in Production Engineering IGP
Albert-Einstein-Straße 30
18059 Rostock 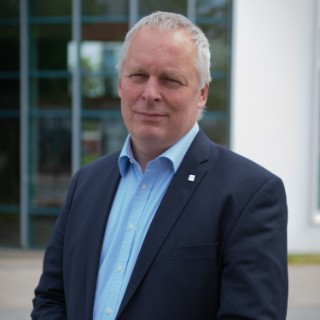